This image of the famous Dehgewanus, or "White Woman of the Genesee" comes from a real photo post card dated 1907. According to an article by Harry S. Douglass, this image is taken from a painting done by Carlos Stebbins. The photograph which accompanies the article has the label "The White Squaw at the age of 90".

From time to time, a paperback romance offers the story of a love affair between a white woman and an Indian warrior.

The Seneca tribe of western New York State was involved for many years in the French and Indian Wars (1689-1793).

During the last years of the fighting, they captured a young, fifteen year old white girl. Her parents were killed in the fire that destroyed their home.

Taken captive, Mary Jemison was terrified, but Mary soon learned that the Seneca were not going to hurt her. Instead, Mary was treated with great kindness and in time, the Seneca adopted Mary as one of their own.

Years passed, and Mary grew up to fall in love with a Seneca warrior. They were married and had an infant son. Then something happened that not only threatened to take Mary away from her husband and baby, but her adopted people, as well.

The wars had been over for five or six years when the British decided to offer payments to any Indian who returned someone who had become a prisoner. Many were happy to hear this and were anxious to return to their former life, but not Mary.

Mary loved her warrior husband and did not want to leave him and their child, or the Seneca people who were now her family.

A council had to be called to decide Mary's fate, because the British decree had posed a problem. Mary was now a Seneca in her heart, as well as by adoption. Mary's inner spirit was bonded to the spirits of all other members of the tribe.

In Iroquois belief the bonding of everyone's spirit was what made the tribe strong. The force of the tribal spirit could not be broken, or bartered for money. It was agreed that Mary would remain with her adopted family.

Relief was short lived. Even among the people, there are sometimes those who can be weakened by money. The day came when a chief from another tribe came looking for Mary, to return her to the British, for a price.

The people of Mary's village were outraged. It is said that one warrior said he would kill Mary, rather than see her happiness destroyed. The argument became so heated that Mary grabbed her infant son and ran off into the woods to hide.

Mary's husband and his people defiantly stood their ground against the intrusive chief, until he gave up and left.

Happily, Mary returned to her husband's arms. Together, with their infant son, they went back to their home on the banks of the Genesee River. 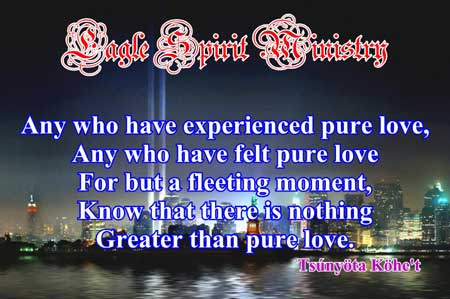