The other night on TV a contestant could not identify the word 'tepee.' How could he miss, but then, our children don't play Cowboys and Indians anymore.

What does the term 'tepee' mean to you? Is it just a decorated tent you saw at a powwow? Haven't you ever wondered about it? Where did it originate? What was it like inside?

In early times it had it's beginning in the forested northeast. Later, as the Sioux and others moved west, onto the Great Plains, they took the tepee with them.

These Indians were hunters, constantly following the buffalo and other game. They were quick to recognize the convenience of the tepee. A home that so accommodated their lifestyle was ideal for them.

When a spot was found for a new home, it could take days before it could be set up. The sixteen to twenty poles required were hard to come by due to the scarcity of suitable trees, those preferred being pine, cedar or spruce. Poles often had to be carried many miles. Once acquired, they became one of the family's highest assets.

When enough had been gathered, the four main poles, each 24-25 feet long, were tightly lashed together at one end. These four were then stood up and spread out, and the others balanced into them to make a frame. Buffalo hides, sewn together, formed the exterior covering. The opening always faced east.

Wooden pins tightly closed the skins over the frame. Horizontal rods were placed halfway up the interior, between each pole. This braced the frame, as well as being a handy holding rack for household and personal goods. Two ear flaps at the top of the hole could be opened for air and letting cooking, or altar smoke, rise out of the tepee. In cold or wet weather they could be closed. Wooden stakes secured the buffalo hide to the ground.

On the inside, a long rope was purposely left hanging from the top where the poles came together. So that it was not in the way, it was kept wrapped around one of the poles. Should a strong wind develop, the rope was quickly unwound, pulled tight, and fastened to a stake in the centre of the tepee. It acted like an anchor, until the storm was over.

The horizontal convenience rods held parfleches (a catchall bag), the warrior's shield, bow and arrows, quiver, and medicine bag. On the floor beneath, lay the warrior's war bonnet case, pipe bag, tobacco board, and pipe stoker, all in his personal space.

The tepee was a place of worship for the family, as well as a home. Their altar lay behind the fire pit. Incense was frequently burned in hopes of calling on the mysteries for dream totems, or a blessing from Wakan Tanka. Etiquette varied from tribe to tribe. No one ever walked in front of anyone else, and especially not between the warrior and his fire. To be on the safe side, it was better to always walk behind the person.

In sitting to dinner, before anyone ate, the father would toss a small bit of food into the fire. It was to show that the food was there from the blessings of Wakan Tanka. Our family grace, just in a different way.

Life in a tepee had a strict code of rules. Each person had an assigned space for not only his belongings, but for the time he spent inside the tepee. This included all family members, and was strictly followed. There was no place in their nomadic life for belated confusion. 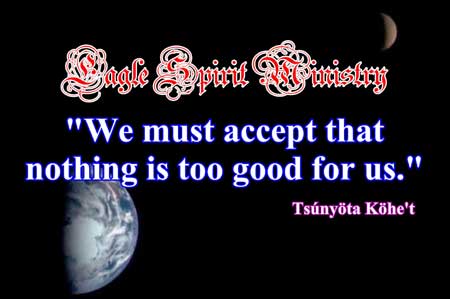