The recent snowstorm and the bitter cold, that is still with us, is a great time for storytelling. This one comes from people of the subarctic in the area of British Columbia.

A long time ago, before people were on the earth, the winter decided to stay a while longer, or so it seemed. At first, the animals didn’t mind, but when months turned into years and the earth remained freezing cold, something had to be done. Not only were the animals shivering in the cold, they were starving to death.

“Where was the warmth?” everyone asked.

A council was called and all the earth’s creatures attended except one; the bear. That made everyone suspicious.

Now it so happened that in those days the bear lived on a special plane above the earth. A search party would have to be formed, to spy on her. The fox, bobcat, mouse, and others, immediately volunteered.

One by one they crawled up through the hole in the sky to the place where the bear lived. It wasn’t long before they found the bear’s home. A column of smoke indicated it was warm. They found two cubs cuddled inside.

"Where is your mother?" asked the fox.

"Out hunting" answered the cubs.

The searchers noticed some bags hanging on poles and asked the cubs what was in them.

"But what is in the fourth bag?" asked the searchers.

"Oh, that's a secret" said the cubs. "Mama would be angry if we told you that." But being little ones, they eventually let it slip that the bag held the earth's heat.

The searchers had to work fast. Mother bear would not be gone long. Pulling the fourth bag from its pole, they went outside and hid, until they figured out what to do.

All too quickly they saw the mother bear returning. The bobcat immediately shape shifted into a young caribou, so she would chase him. Seeing him as dinner, that's exactly what she did.

Meanwhile the remaining searchers, pulling the big bag of heat, made for the opening back to their world. The bag was so heavy; they had to take turns pulling it.

With the bear right on the caribou's heels, he plunged into the lake to slow her down. She jumped into a canoe to follow him, but it upset, slowing her down. Reaching shore, the caribou changed back to being a bobcat and ran to help his friends.

With the bear getting very close, the searchers got to the sky-hole and slipped back to earth, with their prize, just in time.

But the story doesn't end there.

Yes, the warm heat melted the snow. The sun shone, and the dark, cloudy days were gone.

Then something happened. All the years of snow melted, and made a great flood. Water was everywhere. Was everyone going to drown?

No way. Mother Earth had provided a giant tree, big enough to hold the earth’s creatures and save them from drowning. Meanwhile, a giant fish appeared. It swallowed all the water and grew and grew until it became a great mountain, on which life could flourish once again. 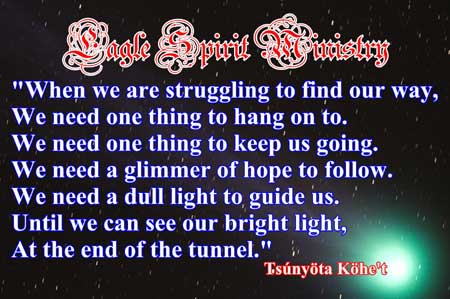