Few romances can compare to the love of the Plains Indian and his horse.

By the early 1700's descendants of the horses brought to America by the Spanish explorers had finally reached the Great Plains.

At first sight, the Sioux believed the horse to be a super-breed of dog. It had all the dog's essential parts, but it was larger, stronger, and had more speed and endurance than anyone could have ever imagined. In their picturesque language, the Sioux called it Sunka Wakan (Mystery Dog), not realizing that this animal was about to usher in their "Golden Age", changing their way of life forever.

It didn't take long for that change to begin. As the value of the horse became evident, it prompted ideas of wealth and prestige, thoughts that never before had occurred in the minds of the people. Suddenly, everybody had to have one! Better still, have many! As other tribes acquired the animal, stealing, an act frowned upon in Indian culture, became the norm. Counting coup, once reserved for wartime credit, could not be counted in horse stealing raids, as well.

With their love, and innate understanding of animals, some tribes began to experiment with selective breeding, and the Indian pony was born. Small, fast, and with great endurance, this adaptable pony is still considered by many the animal of choice. Rodeo fans can appreciate their cutting ability and speed in the barrel-racing event. And where is the person who hasn't admired the Pinto and the Appaloosa for their strikingly beautiful color patterns. Have you ever thought of those patterns as camouflage? The Indian did.

While the Indian boy was riding well by six or seven, learning to shoot a gun from beneath the horse's neck, or belly , was learned much later. This required the rider to slip to the horse's side, holding onto its back with his heels, while one hand gripped a rope that was braided into the horse's mane.

Preparing the horse for this kind of skill in warfare required special training. Patience, gentle words, gentle hands, and loving guidance brought magical results. Bronco riding was never used, nor was jerking of the reins to break the horse's spirit. Spirit made the animal what he was, and the Indian didn't want to lose that.

Legends tell us of war ponies not only responding to their training, but in many instances, reacting on their own to save the life of their master. As time went on, and horse raids became more numerous, most warriors made it a point to tether their favourite pony to their wrist, for safe keeping, while they slept at night. Such was the bond between them.

This close relationship was carried out in yet another way. Only the Indian's war pony was privileged to accompany the warrior to his secret hiding place where he put on his war paint. There, he would first decorate his mount, using the same special paint he prepared for use on his own body. No higher honour could he give to his war-partner. The signs painted on the horse's body blatantly displayed to the enemy the warrior's accomplishments and ability, horizontal lines for coup, and hand for an enemy killed, to mention two. 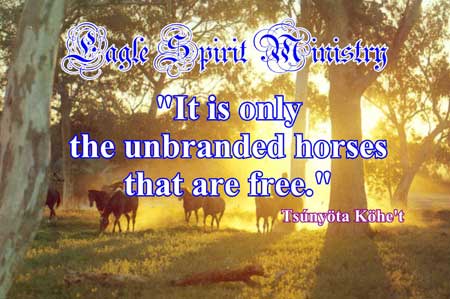