On The heels of the summer solstice, the heat of July has set in, as it does every year. This has me wondering if July, and her sister month, August, are meant to be Mother Earth's Sweat Lodge. These months are notorious for fire and heat, destructive, yet at the same time, purifying the natural world, in the Great Spirit's perfect scheme of things.

It is also set me to wondering if once upon a time, a native warrior noticed this annual event, and was inspired to duplicate it for his people by inventing the sweat lodge. Most of "the people" have used it, in one form or another, with a surprising variety of reason.

In a special use among the Natchez and Chickasaw of the southeast, newly named warriors were required to spend thirty minutes in a well heated sweathouse, after which they had to run out naked and jump into a cold river, or roll in the snow. It was all part of a series of ordeals to show that they were capable of responding to a call for duty at a moment's notice.

The Delaware made their sweat lodges out of stakes and mud, and they were always near water. The entrance was one of the lowest known. It was so small a tiny child could hardly crawl through it. Adults literally "wormed" their way through it.

While the Delaware lodge was used several times a week, in the ceremonial sense, it was also used by warriors to sweat off their body paint. After either use, a quick dip in the river always followed.

Unlike the mud structures of the eastern woodlands, the sweat lodge of the Plains Indians was more complex, in that sacred beliefs were imbued in its very construction.

The Sioux, whose spiritual beliefs were of the highest level, deliberately chose the supple branches of the willow tree for the lodge's framework. The tree's loss of leaves in the winter, and rebirth in the spring, represented to them an assurance of life after death. Set off in a secluded section of the camp, the dome was constructed with nature's four directions in mind, with the opening always facing the east. It was then covered, preferable with buffalo hides. If such was not available, other hides were used, or in extreme cases, blankets were used.

The opening was always low, bringing to mind humility, when one entered. The fire in the altar (center pit) represented rays sent by Father Sun, the heated rocks, Grandmother Earth.

During the ceremony, the Water Chief poured water from a large container onto the rocks in a special sequence.

The first dowsing was four cupfuls, the second dowsing was seven cupfuls, and the third dowsing called for ten. Finally, the water remaining in the container was poured onto the rocks. The Sioux had a name for this, it was called "Water of a Million Wishes."

It should be noted that, after each of the pourings, an outside assistant was standing by to briefly life the entrance flap and then drop it again, returning darkness to the inside. This dash of light represented "enlightenment" to the participants inside the lodge.

When it was over, immersion in water, or snow, was their "Amen."

The ever-flamboyant Crow carried the Sioux ceremony a bit farther. They viewed the dome of the lodge as the body of the "First Worker". The first four cupfuls of water on the fire represented his arms and legs. The rising steam was his image. The seven cupfuls represented the Big Dipper, and the ten cupfuls represented the Star Cluster, or, as we know it, The Pleiades. The remaining water, as it was poured on the rocks was called "The Other-Side-Camp," the place where their dead went to live.

Surprisingly, despite the sacredness with which most Native Americans regard the sweat lodge, there were a number of tribes that made use of it for other purposes.

A case in point is that of the Havasupais (Blue Water People) who lived in an area of the Grand Canyon. They had a most unique idea for their sweat lodge. When it was not in use, the Havasupais, who loved talk sessions, used it as a Clubhouse!

An unwarlike people, their passion lay in sociality. The isolated setting of the sweat lodge made it the perfect "hang-out" for gaming and gossip. There, the men of the camp could "shoot the breeze" into the wee hours of the night, undisturbed. 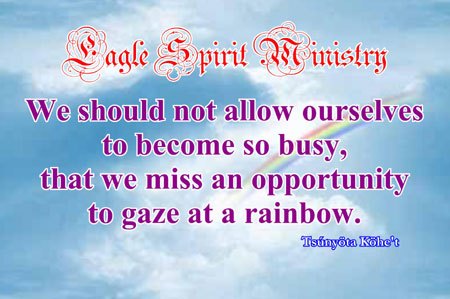