"Clothes make the man," is true in the outer sense, in today's world, but in the world of the American Indian, clothes are the inner sense of the person wearing them.

The modern business suit is a style you can recognize all over the world, no matter who is wearing it, however, that on-going sameness, does not necessarily apply to Native American regalia. One's tribal affiliation is often greatly over-shadowed by the striking individuality of the wearer. Just ask anyone you know who has been to a powwow.

So many non-Indians still do not seem to know American Indians are from all different nations, just like Europeans are from all different countries. They still only recognize the movie stereotypes such as, Plains Warrior, the turbaned, bare chested Apache, the Eastern Woodland with the roach, and a few, who have been to Florida, know the classic patchwork of the Seminole.

The most you can count on is that colors, feathers, and fringe will show up somewhere, if you look hard enough.

Unlike the non-Indian, who is locked into a style that never seems to change, the Indian personality isn't afraid to express itself in a hundred different ways. Regalia causes the Indian's heart to sing.

In early times, it was a picture gallery of the warrior's life. Everything that had ever happened to him was there, for everyone to read. Also displayed were his hopes and dreams and his close ties to the natural world.

It is important to note, that over time, trading between tribes led to alternatives in apparel, and the coming of European traders confused things even more. The Apache shed animal skins for cotton cloth, more suitable to his climate, and pretty trade cloth had its appeal to Indian women. It was easier to obtain, and much easier to sew. Things changed, but Indian individuality has remained the same. When you see regalia, you see the person, first, the culture, second.

Attend a powwow. Visit the storyteller from whom you can learn much. Watch the exciting dances, and if you have any questions about a dancer's regalia, don't be afraid to ask. You may find the story behind the regalia more fascinating than the dance itself. Use a polite approach, and the dancer will be glad to answer you. Just remember three important powwow rules. 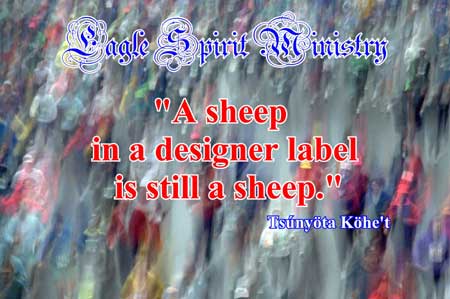