Trees are magnificent creatures which landscape the earth. There are anywhere between 60,000 to 70,000 species of trees which can grow up to 367 feet high and have a diameter of 20 feet. Many trees have an inordinately long lifespan in comparison to us humans. The sugar maple live as long as 500 years, oaks live as long as 1,500 years, junipers as long as 2,000 years, and giant sequoias as long as 4,000 years. Bristle cone pines, some almost 5,000 years old, are quite possibly the oldest living beings on earth. Trees have an ability to grow to a magnificent size and attain longevity. These awesome beings are the earth's historians.

Possibly because the tree timelessly adorns the land, many cultures have revered the tree throughout recorded history. For example, the ancient Egyptians held a belief that certain trees possessed supernatural powers, and the Celts used various species to represent lunar months and specific dates, such as the summer solstice.

Trees can live up to 5,000 years, if not longer, which is why trees carry within them the knowledge of great civilisations, such as Atlantis and Lemuria, that have emerged, reached their peak, and steadily declined only to be recorded in the annals of history. In addition to the historic wisdom that trees will teach us if we choose to learn, trees can give us much insight into the nature of our own existence. We need only take the time to listen to the gentle rustle of their leaves.

Upon careful contemplation of the make-up of trees, we can observe that life can be examined by carefully observing their movements. This may be why the ancient Qabalah was designed in the shape of a tree, a popular divination spread is called the 'Tree of Life', and some forms of astrology are associated with various species of the plant.

The path which we encounter can be considered similar in evolution and development to one of nature's most solitary and majestic souls. It is important to remember that just because trees do not speak in words which we can easily understand, does not necessarily mean that trees do not have important things to tell us. It is up to us to unravel the mysteries which these ancient souls gently whisper.

Three basic components of the tree are the root, trunk and body. In our terms the roots are similar to past lives, the trunk corresponds to birth and early childhood, and the branches form the life path a soul takes on his earth walk.The tree has a complex root system which, if we could see beneath the earth, is about as large as its branches. If we are open to the concept of reincarnation and past lives, this immense root system can be analogous to our past lives. Numerous lives form a complex web to create the soul essence which we bring into our current incarnation.

The trunk of the tree is similar to birth and early life. Mystics believe that before incarnating into the earth plane, we agree to encounter certain life lessons to help us, to help our soul more fully develop. By choosing to work on certain issues we will be given certain opportunities for growth and tasks to accomplish during our earth walk. Although we have free will to live our life as we see fit, our objectives will be presented to us time and time again, to enable us to fulfil our pre-birth obligations.

Our life can correspond quite analogously with the branches of the tree. The larger branches can be likened to the more crucial decisions we are required to make during our life, and the smaller branches show the, less significant choice which add flavour to our existence and can consequently alter our destinies depending on the course of action we choose. Each successive branch on the tree depicts alternative pathways which could be taken during our life journey.

When viewed two dimensionally, a tree can give amazing insight into our life which can even lead to speculation of the possibility of parallel lives and realities. As the major branches relate to the choices we make, and the pathways we take during our sojourn, the question needs to be raised as to whether the path which we chose not to take, has any less validity.

Esoterics firmly believe that thought forms produce energy and with this premise in mind, if we contemplate taking a particular action we may in essence create a thought form which spurred into being an entirely new life simply based on the energy we put into thinking about such an endeavour.

Under the concept of parallel realities, the path we chose not to take, in this sphere of existence, may very well have been taken by the thought form created when considering possible alternatives. Therefore, the path not taken in this incarnation, very well could have been taken on another level of reality where the main character in that existence could be leading an entirely different life as the originator of the idea. Consequently, when we daydream of the life that we would like to have, we may very well be creating that existence in another realm.

Edgar Cayce, a famous American mystic once made the comment that all that has ever been, has been dreamed of beforehand, thus alluding to the premise that we work alternative paths out in our subconscious mind, before we consciously decide to make them a reality.

As a hypothetical situation, two beings in separate spheres of knowing could have begun their awareness from the same human shell, but the soul's thought patterns caused portions of the soul's essence to split off, fragment, and go into entirely different directions. It is also important to remember that we each perceive reality in a slightly different manner, thus indicating that there are at least as many spheres of reality as there are people, or souls on earth at any given time.

As with the tree, an infinite number of limbs branching out and foliating the earth gives testament to this concept. With many species of horticulture a leaf can simply be snipped of to grow a entirely new plant. With this in mind, is it so difficult to comprehend that the same could be done on an esoteric level with the human soul?

We can learn a lot from trees about life, death and the universe. Trees agelessly stand so majestic against the earth's backdrop, and it is easy to ignore and even forget their wisdom and beauty. We only need to quiet our mind and take the time to listen to the tree's gentle whispers, in order to learn much about ourselves and our esoteric mechanisms.

Take a few moments to reflect upon Tracy's observations..

Next time that we are sitting in a park, we may take the time to listen to the gentle rustle of the leaves. 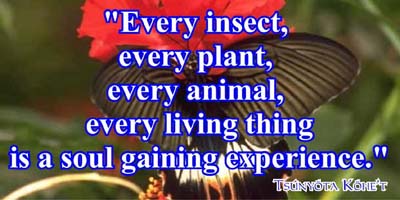