Few words are more exciting in American Indian culture than Shapeshifter. Both mysterious and illusive, the mind is challenged to know more about this phenomenon which has occurred through all the tribes in America.

To most, shape shifting is a superstitious belief left to primitive people. There is no such thing in "civilized society." Not true. Folks just don't look at it the same way. Shape shifting occurs in American Indian culture in song and dance, hunting, healing, and warfare.

Only in the white man's world does it take on the dark side, appearing as werewolves and bats (Dracula). As always, between the red man and the white man, there is a vast difference in point of view.

Shape shifting touches the very soul of the Indian. Brothers in nature, it is quite natural for him to feel as one with the spirit animal sounds in his chanting, just as he feels Earth Mother's heartbeat in his drumming.

In the dance, he wears feathers or the skin of his animal guardian, while his movements take on the grace and form of the eagle, wolf, bear, etc., whichever one he himself has become. The dance is shape shifting in its most eloquent form.

In some tribes, shamans use shape shifting in a more serious manner. Wearing feathers, or the hide of his guardian spirit, the shaman would perform the animal's actions to imbue its healing powers in both himself and the patient. Belief in the healer and his shape shifting often could mean the difference between life or death. So convincing were the shaman's performances, that sometimes an enemy would go out into the woods and kill the shaman's totem animal in the belief that he might be killing the shaman himself while he was in animal form.

A form of shape shifting had a role in hunting. To hone this skill, in days gone by, the boy Indian would choose an animal to study. It was usually the wolf, noted for its cunning and survival skills. For as many as two years, the boy would devote time each day to be alone, near the wolf, observing its ways. In time, he learned to imitate its ways, and understood its thinking so well he could become the wolf himself.

So close was this relationship between animal and man that early settlers came to believe that Indians actually were part wolf and killed them as they would the animal itself.

Shape shifting to his wolf counterpart was an asset to the Indian in warfare. His ability to silently track an enemy was often superior to an enemy's gun. In actual battle, calling on one's spirit animal, and becoming that animal, gave a warrior uncanny OHITIKA (courage) in the face of unbelievable odds. 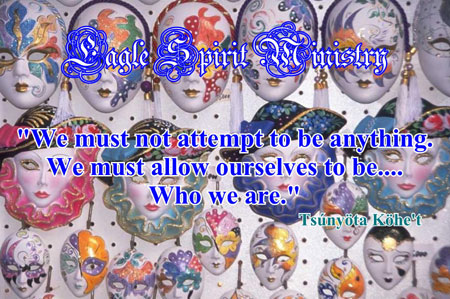