Indians had spiritual concepts of both nature and wildlife. Indians deeply believed that every living thing came from the Great Spirit. Indians referred to all creatures as their 'brother.'

The most feared natural phenomenon was the thunderstorm.

Indians reasoned that such a frightening event could only be the work of a monster, and the Thunderbird, called 'Wakinyan', by the Sioux, was born. The flapping of the Thunderbird's huge wings accounted for the thunder, while the Thunderbird's eyes flashed the dreaded streaks of lightening.

The Thunderbird would swoop down and carry away any of the 'Unktehi' that dared to raise it's head above the surface of a river or lake.

The 'Unktehi', or water monster, was blamed for all the drownings, whether caused by tidal conditions or quicksand. However, even the 'Unktehi' had a good side, because fear of the 'Unktehi' made all of the people careful whenever they were in or near water.

The bear's ability to stand upright and reach out with its front paws made the bear seem very human like to the Indians. It is not surprising then that the bear ranks second in spirit cults and societies, not for the bear's size and strength, but for the bear's 'wisdom.'

It is interesting to note that while in most tribes women could form cults comparable to those of the men, women could never have a bear society among the Sioux, because the Sioux simply did not believe that it was possible for a bear to appear to a woman in her dreams.

The wolf's ability to avoid capture and slip away unnoticed caused the Indians to choose the symbol of the wolf for the sign language words 'war scout.'

The wolf's cunning and survival skills, made the wolf the most popular spirit used by 'war societies.'

Insects as spirits were largely overlooked, except for the spider and the butterfly.

Spiders were considered to be highly intelligent, and to have great patience, because of the spider's work in the construction of its webs.

In the eyes of the Crow people, the butterfly was respected for its agility, while the Blackfeet looked at the butterfly as a bringer of pleasant dreams. 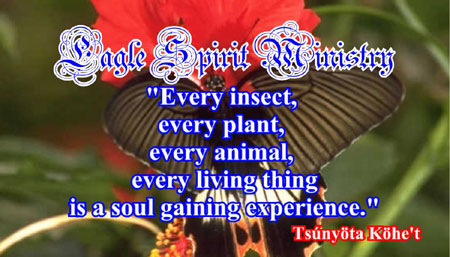