We will soon slip into fall when the trees proudly display their vibrant change of color. Let me take you back in time to share with you a story about a "different" change of color, as it was told around Indian campfires a long time ago.

It is a starlit night. A soft wind is blowing. We settle down to listen, as an elder begins his story, which goes like this.

A long time ago the People were starving. Despite their best efforts, their finest hunters were unable to locate any buffalo to provide everyone with food, and many of life's other necessities which the animal gave them.

Things got so bad, a council had to be called. Everyone knew that the crows, which in those days were beautiful white birds, were to blame. A friend of the buffalo, whenever they would see hunters coming, they would fly over the herd with a loud "Caw! Caw! Caw!" to warn them.

The herd would thunder away, leaving the hunters empty handed.

Something had to be done, because with fall approaching the chance of closing in on a herd became less every day. "We must catch the big lead crow and punish him," everyone cried out.

A plan was quickly formed. A young man was chosen who, hiding under a buffalo skin, with the head attached, would sneak up on a herd and become a part of it. A few hunters would then pretend to be on the hunt.

As soon as they put the plan into action, the crows appeared. "Hunters are coming! Hunters are coming!" cawed the crows, their noisy ruckus sending the buffalo into a stampede, all except one. The young man, who was there to trick the crows, remained, pretending not to hear the noisy birds.

Frustrated, the big lead crow landed on his head. "Can't you hear me?" he cawed! "Run, I'm trying to save you. The hunters are coming."

Quickly, the young man grabbed the crow's legs. He tied them with rawhide and the struggling bird was taken back to camp.

Furious with hunger, the sounds of "Burn him." rose through the camp. This really frightened the crow, who had only been trying to help his friend the buffalo.

The bird's fears grew, as a fire was lit and he was carried towards it. As his captor's hands moved to drop him into the flames, the rawhide caught fire and quickly burned, setting the crow free. He soared upward, but he wasn't quick enough to keep his beautiful white plumage from getting charred in the flames. "Caw! Caw! Caw! I promise I will never again help the buffalo" he screeched, as he flew away, flapping his sooty feathers mightily. No one remembers ever seeing a white crow, because from that day on, all crows' feathers have been black. 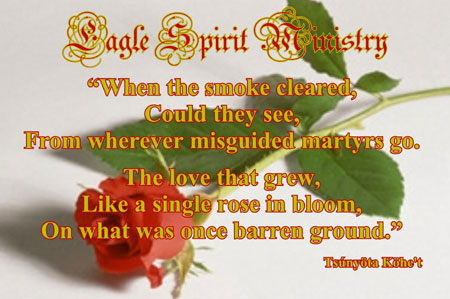