The Fourth of July celebrates American Independence, the founding of a new nation, as if we were the first ever to be here.

Overlooked is the fact that the ancestors of many present day Indian People were here thousands of years before 1492 or 1776.

One ancient site can be found at Osprey, Florida on the Gulf Coast. It is called 'Spanish point.'

The people who lived there for 4,000 years were not related to the Seminoles, who did not migrate to Florida until the 1700's, being forced out of Alabama and Georgia by European settlers.

Thanks to a few who cared, when the Spanish Point ruins were discovered in the late 1800's, archaeologists were called in, who skilfully brought together bits and pieces that told us much about these ancient people. Best of all, the site was preserved and not ploughed over in the name of progress.

Archaeological digs revealed that these ancient people, using dugout canoes, crude hooks, and nets, brought to shore everything from the smallest crustaceans to stingrays, catfish, swordfish and fourteen species of shark. From meat to bone everything had a use.

The teeth of the Tiger shark were prized cutting tools. Shark skin was used as sandpaper. Fish, animal and even human bones were made into tools, fishhooks and jewellery. Hammers and picks were made out of heavy marine shells like the fighting conch. (Yes, there really is such a creature.)

Family life was simple. The men fished and hunted, while the women did the home chores. Their diet was mostly seafood and animals from the pine forests. Berries, palmetto, prickly pear and aquatic plants were eaten in season. Men wore a simple breech cloth while the women wore scant attire woven from Spanish moss.

Sand mounds contained human burials. Most were in the foetal position, but some contained only skulls or bones. One in particular contained only an eight foot alligator, the bodies of four dogs, and two strands of beads made from the backbone of a sawfish.

The ancients at Spanish Point, living in close harmony with the natural world, survived for four thousand years. It makes one wonder then, why each of our so-called 'civilized' societies have lasted the mere 'blink of an eye' in the eons of time. Think about it.

In the interest of civilization, our animal kingdom is disappearing right before our eyes as man destroys its habitats. Our forests are falling to progress and greed. The environment that protects us, Mother Earth herself, is in chaos. 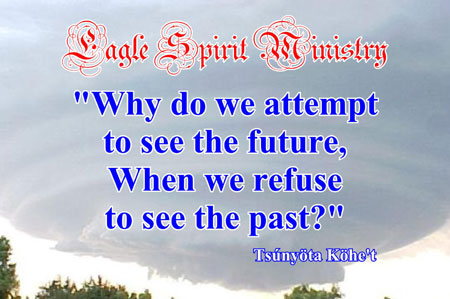